From the Tupilak/ILGCN international desk:

Stockholm:  The last two sessions of the spring 2013  of the Living Rainbow History Museum took place at the PositHIVagruppen local in Stockholm April 25 and May 13 with art work, photography, presentatons, music, poetry, film screenings and award ceremonies.

The ILGCN/Sappho in Paradis  award (for outstanding publications and journalism) was visiting Belarus website LGBT journalist Aliaksandr Paluyan of GAYBE.NET -- in Sweden thanks to the Swedish Institute's journalist exchange program -- and QX-Sweden, received by QX publisher, Jon Voss.  Both provided background information about their work and their publications.

Among other presentations: Ulf Petersson of the Unstraight Museum with its next stop in Albania, Raino Kirkma with a history of the Stockhlm Gay Choir,  about the PositHIVagruppen activities by chairman Anders Björum and Serguey of the PG youth movement and on Norwegian contributions to LGBT culture here by Magne Eliassen.

Poetry readings were provided by Sweden's Tomas Åberg and a translation of works by Latvian gay poet, Darius and words

Photography was provided by Jonas Norén and Elinore Lindén Strand, both of Sweden, as well as selections from the Tupilak & ILGCN Travelling Rainbow Art & Photography Exhibition.

Performances included songs by Axel Mihau of Poland/Sweden and the Mad Monk of Sweden and film screeings also included "Mishama -- the death mask" of Malga Kubiak of Sweden/Poland and "Why so Silent"by PG. 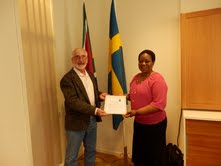 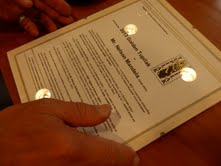 Stockholm -- A delegation from Tupilak (Nordic rainbow cultural workers) handed over the 2013 Golden Tupilak award to former  President Nelson Mandela via the South African Embassy in the Swedish capital on May 21, 2013.

Receiving the award diploma on his behalf, South African Ambassador Mandisa Dona Marasha said, "This is a great honor and the diploma will be forwarded to Nelson Mandela and the Nelson Mandela Foundation in South Africa. We are also proud that South Africa under President Mandela was the first nation in the world to include "sexual orientation" in the clause on non-discrimination in its state constitution."

In the embassy discussions of the worsening situation for LGBT people in parts of Africa, in Eastern Europe and elsewhere, First Secretary Eden Reid said, "It is important that the position of Mr. Mandela on LGBT rights is remembered as a reminder to many others today."

The award motivation mentions Mandela´s instructions --  while still in house arrest --  to his assistants not to send away rainbow-flag carrying demonstrators joining in the risk-filled protests chanting 'Free Nelson Mandela' since everyone was needed on the barricades NOW -- not later.

It also points out that  Mandela -- on one of his first foreign trips as the new president of South Africa -- was asked at a Stockholm press conference what he would do for LGBT people in South Africa, he answered that he "...would leave no stone unturned" in work for the rights of LGBT people in the new South Africa.

"We feel that Nelson Mandela's pioneering position and continued support of LGBT rights is a strong message to many other political and religious leaders around the world trying to win support from reactionary homophobes by publically denouncing LGBT people -- even calling for their persecution, imprisonment and execution," said Bill Schiller, Tupilak's international secretary.

"South Africa has a long history of supporting culture as a powerful means of working against intolerance and discrimination," Eden Reid concluded.

This Tupilak's finest prize diploma has earlier gone to such individuals and organizations as Amnesty International, Sweden's Civil Rights Defenders, the international humanist movement, the EU's LGBT Network and those working within the United Nations trying to educate and enlighten representatives of homohobic governments which continue to deny human rights and dignity to all citizens.

A "tupilak" is a Greenlandic voo doo figure cared out of bone by Inuit to destroy enemies.  Tupilak's enemies are homophobia and silence.

TUPILAK/ILGCN  WORKING FOR IMPRISONED BELARUS CLOTHING DESIGNER
Stockholm -- Tupilak (Nordic rainbow cultural workers) and the ILGCN (international rainbow cultural network) have "adopted" imprisoned Belarus clothing designer Sasha Varlamov as a prisoner of conscience and as a victim of a greedy, corrupt undemocratic political system.
He has been accused (and still not sentenced after two years in detention!) and jailed in Belarus on false charges of tax evasion as a cover up for his resistance to the regime's take-over of his lucrative, internationally-recognized business -- a common method of compensating supporters or this the last dictatorship in Eastern Europe -- and as a punishment for Sasha's position as one of the few internationally-established Belarus citizens widely known as a homosexual.
Sasha is also seriously ill and is not receiving proper medical care in prison.
"We appeal for support from our Nordic colleagues in Nordic LGBT organizations and media in Sweden, Norway, Denmark, Finland, Iceland, Greenland, the Faroes, Estonia, Latvia and Lithuania as well as international LGBT organizations such as ILGA, ILGA-Europe and the international youth organization, IGLYO," says Bill Schiller, chairman of Tupilak and secretary general of the ILGCN Information Secretariat- Stockholm.
"We will try to visit Sasha in person when our delegation arrives in Minsk -- a visit made possible thanks to continued support from the Swedish Institute -- the official institution promoting international exchange between Sweden and other countries," Schiller adds.
Letters of support for Sasha -- and even crucial post card greetings -- can be sent to AleksandrVarlamov, SIZO №1, ul. Volodarskogo, 2, 220050 Minsk, Belarus.