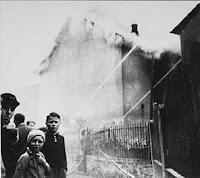 Stockholm participation in the international tribute on: 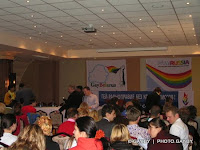 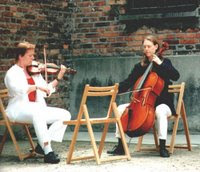 October, 2009
Stockholm * The Nordic Rainbow Humanists have once again joined forces with their traditional allies (Tupilak * Nordic rainbow cultural workers, Nordic Rainbow Council and the International Lesbian & Gay Cultural Network * Information Secretariat, Stockholm) in a number of LGBT events over the last year in Sweden, elsewhere in the Nordic region and Eastern Europe.

This includes presentations, spreading NRC leaflets, displaying photography and art work and answering questions from the audiences -- some very astounded to learn that there are others criticizing religious
oppression and not just the communists, especially in the East where the different religions are regarded as heroic survivors of Soviet times.

At this year*s Stockholm Pride, the NRH had special presentations both at the Pride House and at a city theater cultural day, hosted by NRH member Rolf Solheim from Norway and attended by Nordic Rainbow
Humanist award winner, Carl-Johan Kleberg, formerly head of the Swedish Humanists.

We were also present with rainbow participation at the international solidarity events in Visby on the Swedish Baltic island of Gotland and at the giant International Book Fair in Gothenburg.

Other Nordic events and discussions took place on Finland*s Åland Islands (between Sweden and Finland,) the 1st Baltic Pride in Riga (we include Latvia, Estonia and Lithuania in the Nordic *family) and the
Tribade Festival in Helsinki.

Events in Eastern Europe included the ILGCN conference stages in Bucharest (where we also presented the 2009 Nordic Rainbow Humanist award to the newly-formed Romanian Humanists for their support of the
Romanian LGBT movement), Budapest and St. Petersburg.

(We really missed participation * especially in our Eastern European events * with British and other GALHA members and hope we can arrange joint forces in the year to come!)

We have also continued our discussions with the Swedish and Norwegian humanist organizations about bringing a member of the Nigerian Humanist Association (honored with the NRH award) to Scandinavia to
receive the award  (alas only a diploma * no cash) in person and to hold a seminar about their support for the hard-pressed LGBT movement in that African country.  (Perhaps we could make this a
Swedish-Norwegian-British tour to help share the large travel costs?)


Our next event will be on November 9th *Kristall Nachten* as part of the  international memorials marking this date when the Nazi regime launched its violent, window-smashing attack on Jews in Berlin
and signalling the beginning of the extermination of  Jews, Roma, homosexuals, dissidents and others in the concentration camps.  The event will include discussions of our joint solidarity events during the
year, the recent and historic LGBT conference in Belarus and our special art exhibit, *Nazi & neo Nazi Persecution of Homosexuals.*

Note:  The NRC regards itself as an informal network and as a *northern outreach* of GALHA, and is open to LGBT humanists in the Nordic region.  There is no membership fee and members are
encouraged to be paying members both to GALHA and their national humanist association.

3rd stage of this year's world cultural conferences after Budapest and Bucharest:


St. Petersburg/Stockholm -- The third and final stage of this year's ILGCN (International Lesbian & Gay Cultural Network) world rainbow cultural conference took place in St. Petersburg on September 23rd with discussions, art work, films and musical performances -- part of the biggest queer cultural festival ever in Russia and free from any harassment or bans by the authorities.

"This was the first International Festival of Queer Culture in St. Petersburg and the biggest event of its kind in Russia," says ILGCN co-ordinator Polina Savchenko.  "For 10 days the city saw theatrical performances, concerts, photo exhibitions, poetry slams, seminars, workshops and discussions at different venues of the city (both LGBT and non-LGBT) -- and information about the Festival was widespread both in the LGBT community and in the general society."

"I was very happy to get this opportunity to tell the audience about Helsinki´s 10th Tribade Day & Night Festival and to sing some of my songs," says Finnish ILGCN co-ordinator Anne Jaaskelainen, also
co-ordinator of the annual Tribade festival.

"We were also happy to show some Nordic films and samples of the travelling ILGCN & Tupilak (Nordic rainbow cultural workers) art and photos at the conference," says Bill Schiller of the ILGCN Information
Secretariat in Stockholm.  "And we were proud to hand over the ILGCN 2009 'Grizzly Bear' honoring those struggling in especially ferocious homophobic environments to the organizers of the historic Queer Cultural
Festival in St. Petersburg."

"The organizers of this year's Queer Cultural Festival believe our goal has been successfully achieved -- unification of  different queer people around values of openness, tolerance and mutual respect," adds
Polina. "The audiences included gays, lesbians, transgender and heterosexual people, all enjoying the events in a friendly and open atmosphere and celebrating diversity. The feedback from both LGBT and
non-LGBT audiences is the same: 'We appreciate the atmosphere which is inclusive of all, it is a powerful message, when one social groups recognizes and stands up for the rights of another."

"As a result of the festival, different human rights groups and organizations have made plans for future collaboration and the festival organizers of St. Petersburg have been empowered to continue full
participation in the social and cultural life of their city. ," Polina concludes.

The initiator of the festival was the St. Petersburg LGBT organization, "Coming Out," but many organizations -- both LGBT and non-LGBT--  joined forces to co-organize the event.  Especially
appreciated support also came from the consulates of Netherlands and of Sweden, represented in person at the festival's inauguration.

Earlier 2009 ILGCN conference stages took place in the Romanian capital of Bucharest in May and in the Hungarian capital of Budapest in July (see  ILGCN press releases).

Discussions are under way about the sites of the stages of the 2010 ILGCN world conference -- with proposals from Belgrad - Serbia, Gothenburg - Sweden and Warsaw - Poland (July 16-18 dur  More information:   ILGCN Information secretariat    info@tupilak.org
www.ilgcn.tupilak.org